My oil painting from several years ago Inspired by Hieronymus Bosch

We’re disappointed that Bernie Sanders didn’t get the Democratic nomination for President but we’re not giving up on his revolution to give the bottom 99% of the country a voice and a chance to succeed. We’ll work for Hillary Clinton’s campaign in the must-win state of Florida, but we’ll hold her feet to the fire to make sure it’s not business as usual for the Dems. Try that with Trump who has already said he’s going to dismantle environmental regulations and floated the idea of treating the country like one of his bankrupt properties, which he made millions on, by stiffing holders of U.S. bonds.  What a disaster he would be for our country.  The need to defeat this megalomaniac is the the only thing keeping us going. Bernie supporters aren’t going away, we’re more determined than ever to change the way this country is governed and take it out of the hands of plutocrats like Trump and give it back to the people. We’re presenting this page for discussion at our meeting tonight and we’ll see what happens.

My oil painting, “Horse in Sunset,” sold recently, but I managed to get a giclee made at a great shop here in town. They do excellent work. If you need a special gift for the horse-lover, I can now provide a reproduction on stretched canvas or paper.

Pope for the planet

Yay!  Pope Francis speaks out for the planet.  Maybe now the tree huggers (like me) won’t be blown off as looney and we’ll get more people stepping in to help save our precious world from corporate greed and destruction.  Of course, over-population is a large factor in the environmental stresses being put on the planet as well.  Will the Vatican okay birth control next?  One can only hope (and pray) that will be the next logical (and way overdue) step.

My two oil paintings were accepted into the Winter Garden Art Association’s show entitled “Top Choice.”  The reception is this Thursday, June 4th, from 5:30 to 8 p.m., 127 South Boyd St.,
Winter Garden, phone: 407-347-7996  Hope you can make it to this free event.  Winter Garden is a quaint town worth visiting with lots of fine dining.  And the beautiful gallery is in a former fire station.

Here’s my donation for this year’s fundraiser for “Franklin’s Friends,” a local organization that promotes animal welfare and supports animal charities throughout Central Florida with grants.  Their efforts are important within the local community for the many groups and individuals who are working to safeguard the life and health of our beloved fuzzy, four-legged creatures.  Good luck in your efforts!

MERRY CHRISTMAS TO ALL!

Palette knife painting of a chicken! 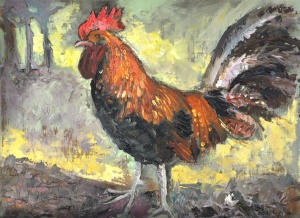 The thought that the XL Pipeline may be approved as a part of the current budget “negotiations” scares me to death. It’s been on my mind for quite a while now and I did this satirical painting about it recently. It’s marvelous therapy. The Thomas Kinkade appropriation seems just about right to depict the whitewashing of the project by those that stand to make millions off it while destroying the earth. What a despicable mess. I hope common sense will trump greed this time.

I’m trying to straighten up my art room in preparation for classes starting tomorrow at Crealde School of Art.  I ran across some portraits I did in open studio and thought perhaps I should photograph them before they get cleaned out.  It’s hard to keep up with all the paper, but I sort of liked some of these.